My twins are 17-months-old and they can’t walk. I’ll give you a moment to judge. I don’t blame you. Most babies walk around the one-year mark. According to the American Academy of Pediatrics, it’s normal to walk between nine months and 15-months. But here are my boys at 17-months, blissfully crawling around without a single attempt to take a step.

At their one-year check-up, I casually asked our pediatrician about it, expecting her to tell me that there was nothing to worry about.

“Do they stand?” she asked. “No,” I replied. “Pull up on the furniture?” No. “Take steps with a walker?” No. Her brow furrowed as she wrote all of this down. “And are you showing them how to walk at home?” “No,” I wanted to say, “I’m crawling around the house.”

“Yes,” I answered instead, “I believe I am.” She looked at my happy little one-year-olds with grave concern, then gave me a referral for physical therapy.

The therapist studied my guys from head to toe as they wiggled and writhed. She rotated their tiny legs in and out, pulled them to sit, lifted them to stand, then shook her head as their wobbly legs flopped under them like ramen noodles. “It’s their abs,” she concluded.

“They have low tone in their abdomens.”

Got it. Thanks, I thought, sucking in my stomach. 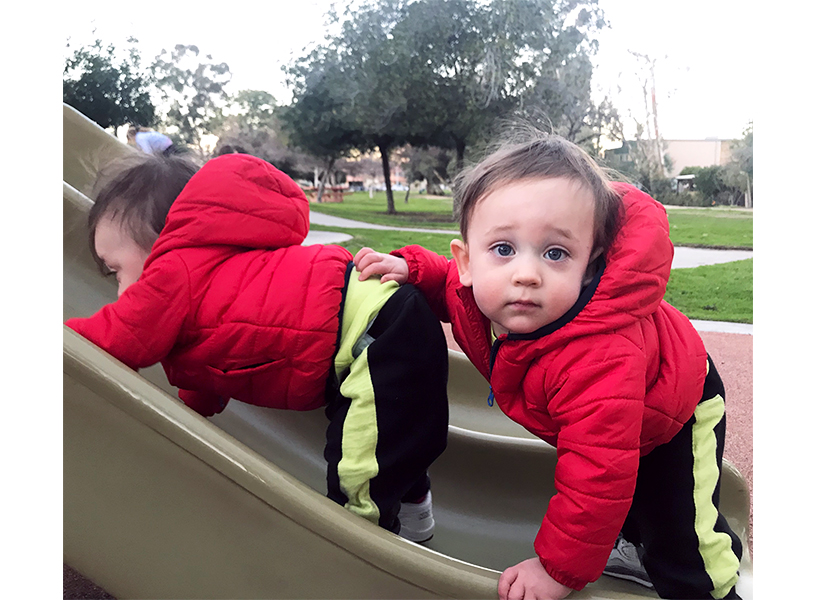 We were prescribed immediate physical therapy sessions, two hours a week, for 16 weeks. During each session, my babies would scream, cry, and occasionally complete an “abdominal exercise.” But they didn’t walk. Not. Even. Close.

I would stare at my little caterpillars and wonder, what is WRONG with you? Then I’d scroll through Facebook and marvel at my friends’ much younger babies walking all over their feeds. At the park, I’d feign interest in other kids, then casually ask, “How old is he?” just so I could see how my boys stacked up. When I’d meet a baby more advanced than mine, I’d get resentful and envious—just a grown adult woman feeling viciously competitive with an infant. Not to mention, I was deeply jealous of their parents. What were they doing that I wasn’t?

I was worried, I was embarrassed, I was making every excuse I could for my boys; “They were preemies,” I’d tell strangers at the park. “They say twins walk later!” I’d explain to moms in our gym class. “They are VERY verbal,” I’d assure the grandparents.

I even got defensive with a stranger on Instagram:

The only people who weren’t concerned about my babies were my babies. They could crawl faster than I could walk, climb up every structure at the gym, and weren’t phased when a 10-month-old stepped over them at the park.  That’s when I realized—if they were perfectly fine with their state of being, why couldn’t I be? Why was I constantly comparing them to other babies?

Children develop and grow at different rates, I know that. I also know that when my twins were born, I was immediately informed that they were in the third percentile for size. The very first thing I knew about my babies was how they compared to other babies.

We’re conditioned to measure our children against others because that’s what our doctors do from the moment they arrive. They tell us where our kid falls on the “pediatric growth chart” and if they are hitting their “developmental milestones.” They use these tools because they’re an effective way to measure growth and development, I appreciate that. They show us these charts and give us these timelines to ensure that we have healthy kids, but I think sometimes they can be interpreted in ways that breed unhealthy parents. Parents who judge and scrutinize. Parents whose own self-worth hinges on their child meeting each milestone on time. Parents who become so caught up in what other kids are doing, they miss out on the joy that comes from accepting their individual child for who they are.

I was one of those parents. I went from no babies to TWO babies overnight. I didn’t know what I was doing—I barely knew which twin was which—and I was looking for anything to reassure me that my babies were on the right path. When I was told they weren’t hitting certain milestones, or falling behind other kids, I would take it personally, and worse, I would take it out on them. I was so worried about what my babies couldn’t do, I had forgotten to celebrate what they COULD do.

So instead of judging and comparing, getting defensive, and making excuses, allow me to brag. My babies can say “Mamma” and “Dada,” “dog” and “duck,” and when they say “frog” it sounds suspiciously like “f*ck.” They can dunk a mini basketball, play a toy piano with their feet and pick each other’s noses with finesse.

Sure they can’t walk, but I have a feeling they won’t crawl into their first college class, or wriggle down the aisle on their wedding day. Eventually, when they’re ready, they WILL walk, and then they’ll be off and running, leaving babyhood behind. So, for now, I’ve vowed to start embracing this extended phase of infancy and to trust that my perfectly healthy boys will develop on their own time. I’ve stopped our physical therapy, I found a new pediatrician and I even made up with the stranger on Instagram.

I’d like to say my newfound enlightenment is because I’ve become more confident as a parent, or because I’ve learned to embrace my twins for who they are. But, let’s be honest: It’s because the moment they can walk I know I’m screwed.