Getting pregnant is the only celebratory life event you can’t immediately celebrate.

Think about it. When you get engaged, you call your friends and family and change your status on Facebook. When you get married, you throw a party and make toasts and go on an exotic honeymoon. When you get pregnant, you get fat and sick and eat carbs alone. And no one is allowed to know why.

If you follow standard protocol, you’ll wait to make it safely through your first trimester before announcing your pregnancy. That makes sense. It also makes you a stone-cold liar. For three straight months, you have to find shrewd ways to deceive your family, coldhearted methods of lying to your friends, and sneaky tactics to mislead your employers. When your body is changing, your hormones are raging and the sight of an Egg McMuffin makes you want to cry and/or vomit. All of that deception can be hard to pull off.

Because my twin pregnancy was high risk, I was advised not to share my news with anyone for at least four months. As a result, I got fatter and moodier, and better at lying. By the middle of my second trimester, I had become the Donald Trump of pregnant people. I could deceive my friends, family, and followers with ease. I figured if he can lead the free world, the least I can do is share some of my tried and true techniques for hiding a pregnancy. Enjoy.

Every bartender in downtown Toronto knew I was pregnant before I’d even told my own mother. While it wasn’t ideal that Chad from Union Nightclub was congratulating me before my family, it was a necessity.

You see, when you’re a married woman in your early 30s, not drinking is the number-one sign of pregnancy. The moment a friend orders water instead of wine, I start planning her baby shower. It’s that simple. And I was determined not to spill my secret over a glass of wine.

So I developed a multi-tiered, comprehensive fake-drinking strategy. Whether it was a formal meeting over drinks, a casual get-together at a bar, or a raging night out at a male strip club (don’t judge), I would arrive early and look for the most reliable bartender. Mostly I would just look for someone who was likely born in the ’90s, didn’t watch The Goods, and was too young to know The After Show.

I would approach them with a casual, “Heeey, I’m Jessi, what’s your name?… Wyatt? Perfect. Nice to meet you.” Then I would lean in, lock eyes and get down to business. “Listen to me—all night long I am going to ask you for vodka sodas. When I do, I need you to give me a PLAIN SODA in a highball glass, so that it LOOKS like a vodka soda, is that understood?” He would nod, adjust his man bun and I’d continue, “In the event that somebody else orders me a drink, you will charge them the full price for that drink, then pour me a NON-ALCOHOLIC version of it. DO I MAKE MYSELF CLEAR?” I would then smile, slide him a $10 bill and calmly drink sodas all night, raising my glass without raising suspicion.

I shot 78 episodes of The Goods while pregnant. Without telling anyone. I didn’t tell our stylists why I suddenly needed clothes pulled in a bigger size. I didn’t tell our makeup artist why I had explosive pre-teen acne. I didn’t tell our production assistants why I needed ketchup chips for breakfast, and I didn’t tell our executive producer why I started to sob inconsolably after a banana bread bake-off. Everything seemed to be going smoothly until Andrea, our health and wellness expert, was leading a segment on home remedies. As a cure for the common cold, she whipped something up with pineapple and herbs and spices, then fed me a heaping tablespoon full of it live on air. I gulped it down just as she sternly warned our audience, “Be advised, this is NOT SAFE FOR PREGNANT WOMEN.” I almost projectile vomited on national television.

The remainder of that segment was the longest four minutes of my life. I was convinced that while Andrea was curing ailments, I was poisoning babies. Casually, in my womb, on daytime television. The minute we went to commercial, I rushed backstage and called my doctor in a blind, breathless panic. She laughed it off and told me to flush the concoction out with water and I would be “fine.” I flushed it out with ketchup chips and I was, indeed, “fine.”

I was several months pregnant with twins when I was asked to host the Canadian Art & Fashion Awards. Not only did I have to perform on stage in front of fashion’s biggest, thinnest names, but I also had to do it wearing six different designer ensembles, all while hiding a growing baby bump. This gave me more anxiety than the thought of having twins.

I had no choice but to tell my stylist, who worked tirelessly to find me more ‘robust’ pieces while convincing me that I didn’t look robust wearing them. The night of the show, I stuffed my two babies into two pairs of Spanx and begged them to stay hidden, just for a few hours. I practiced my red carpet pose; sucking in and standing with my torso erect and my hands wrapped around my waist to cover the front of my belly. I didn’t look particularly pretty, but I didn’t look particularly pregnant either, which was my primary goal for the night.

I stepped onto the carpet and struck my pose as the cameras flashed. Piece of cake, I thought. Until a photographer shouted “To the side, now! Let’s see the dress from the side!” “No thanks, I’m good,” I replied through my plastered-on smile, trying desperately not to move from my carefully-calculated position. The photographer lowered his camera and raised his voice, “I think you’re gonna want to pose a different way, honey. That dress is looking very…. maternity.” I gasped, dropped the pose, hiked up my gown, and marched off the carpet. How DARE you tell a woman she looks pregnant! I thought. Even if she totally is.

4. When in Doubt, Use Props

By the end of your first trimester, you will run out of socially acceptable muumuus. Your bump will start to look more like a baby and less like a burrito, and you’ll have to get creative with how you hide it.

My biggest challenge was on social media. I wanted to continue to share my life, but I wasn’t ready to share the two additional lives I happened to have growing inside of me. When I ran out of #TBTs and shoe selfies and extreme facial close-ups, I asked myself a spiritual question: What would Carrie Bradshaw do?

And so I too would attempt to carry on this proud legacy of shameful hiding, with a beach ball. 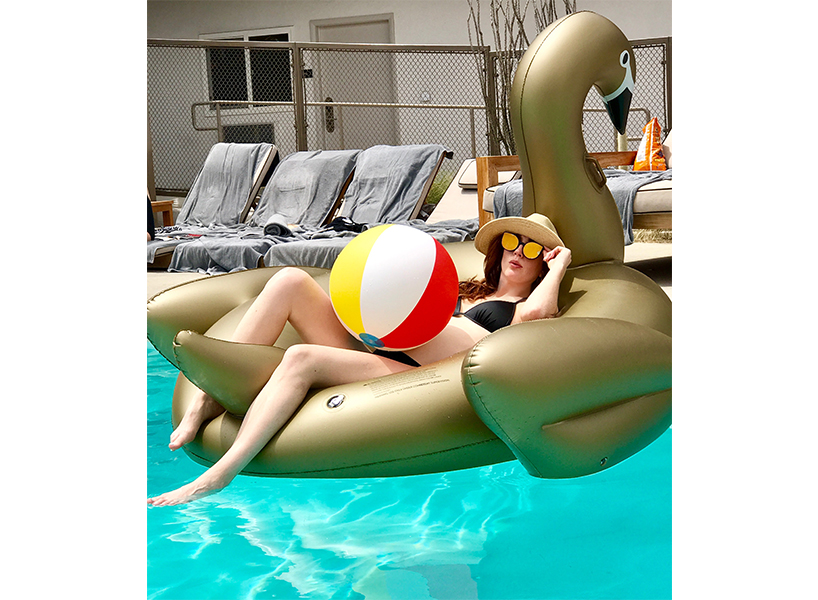 5. When All Else Fails, Use Photoshop

I’m not proud of it, but one time I did use Facetune to get rid of my belly for an Instagram post. And inadvertently gave my friend Ashley a very large bum. My most sincere apologies go out to Ashley, her bum, and my unborn children.

So there you have it, a comprehensive guide to hiding your pregnancy. Good luck, stay strong and remember, in a few short months you can stop paying off bartenders, lying to your colleagues, wearing muumuus and using props, and SHOUT IT FROM THE ROOFTOPS!!!! Because after all, pregnancy is worth celebrating. And eventually, Spanx won’t work.