I never really talk about my husband. I’ve always tried to uphold the illusion of being young, carefree, and single. Just a strong, independent woman who does it all on her own. Then I got pregnant. Which, spoiler alert, I did not do on my own.

As my bump grew, I figured I should start weaving my husband into my narrative or at the very least, my Instagram stories, to assure the public that I was not knocked up accidentally by a one-night stand.

I started to casually mention him in my columns, on television, and when our twins were born, I’d post the odd pic of him doing typical ‘dad’ things—drinking beer, holding babies, drinking beer while holding babies… What I didn’t show until now, was him leaving his high-powered job to raise our newborn babies so that I could go back to work. 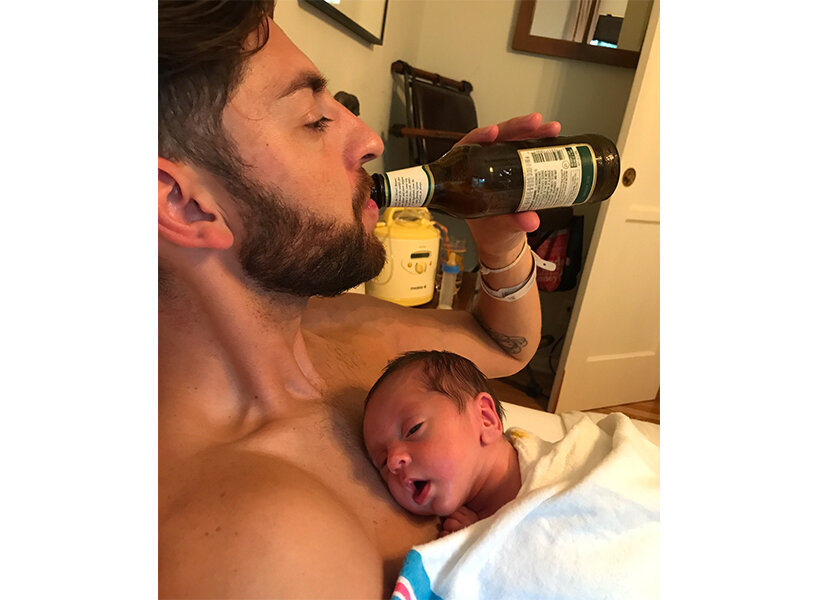 So, after 12 years of kind-of-sort-of pretending he doesn’t exist, I am dedicating my first column on motherhood to something just as important, fatherhood. More specifically, to THE FATHER OF MY TWINS, EVAN. There, that wasn’t so bad.

Evan and I met in 2006. It was the same week that Britney and K-Fed broke up, but somehow, we still believed in love. He was a TV editor working in New York City. I was visiting New York City, looking for a TV editor to cut my MTV demo tape. He agreed, I got the job, and now we have twins.

Evan is funnier and more charismatic than me in every way. He is also taller and has slightly more facial hair than I do, but otherwise, we are equals. Equal partners in life, at equal places in our careers, equally terrible at cooking, and equal contributors to our household. So when we found out we were having twins, we approached our role as parents equally. And when we found out we were having twins the exact same month I was supposed to start shooting my daytime TV show, we decided to divide our time off with the babies equally. 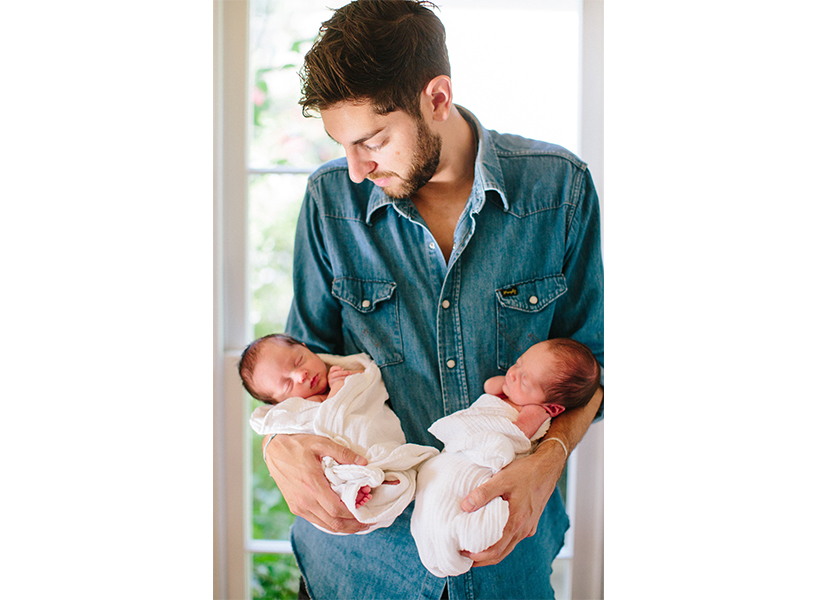 When our boys were eight weeks old, Evan would step away from his successful career as a TV producer and editor to stay at home with them, both because I am too cheap to pay for childcare and also because I wanted to go back to work on my show. Once I wrapped shooting six months later, we’d switch. I felt incredibly lucky that our unique careers afforded us the ability to do this—I know not everyone has the option of taking time away from work to stay home with their kids. I thought this was a great plan until I started telling people about it.

“You’re forcing him to do WHAT?” said my best friend.

“Isn’t he going to feel EMASCULATED?” asked my colleague.

“Just make sure he doesn’t resent you and hate his life and leave you,” advised my super helpful sister.

At that point, it was too late. He had given his leave, I had announced my return and the babies were living, breathing, pooping, crying human beings. Someone would have to keep them alive. Why couldn’t it be their father?

It’s 2018, plenty of new moms go back to work by choice or by necessity, but only around nine percent of dads across Canada take paternity leave.

But beyond the law, lies the stigma. 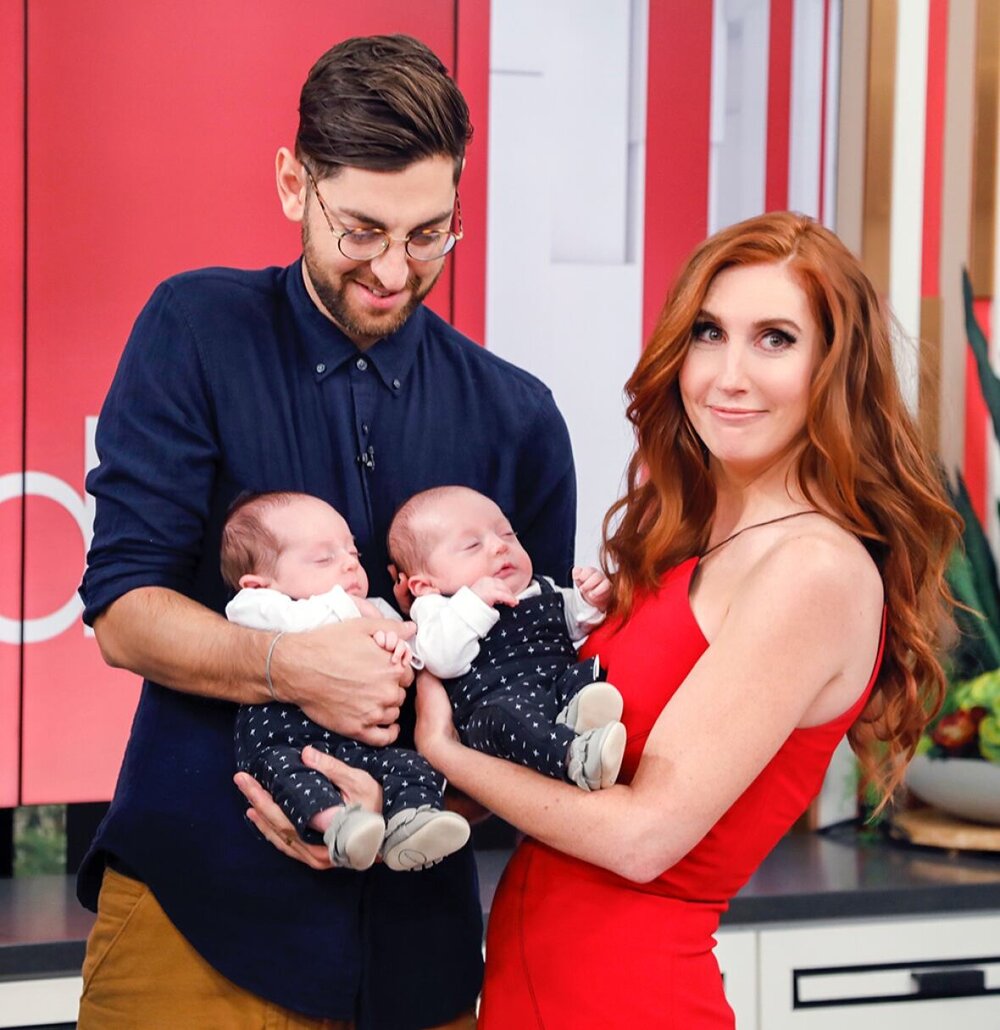 When I started back at my show, people in our audience couldn’t begin to understand WHO was looking after my newborns!? They couldn’t possibly imagine that my partner in creating them was actually at home raising them. In fact, when I would explain that my husband is “a stay-at-home dad,” I might as well have said my husband is “an unemployed loser who wears sweatpants all day, has no job prospects, no income, and nothing better to do than stay at home with our newborns.”

Even my most trusted resource on parenting, the internet, reminded me daily that our set-up was NOT the norm. My 2 a.m. pump-and-Google sessions regularly turned up progressive thoughts on paternity like…

We know you’re cringing every time your guy holds, feeds, burps, or bathes baby differently than you would. But as long as he’s not doing anything that could be dangerous, keep quiet. —TheBump.com

Remind dad to talk to the baby—even spouting off last night’s sports highlights in a sweet voice will do the trick. —mom365.com

If taking care of my child is considered “girly,” then staying at home with my infant twins for six months must make Evan the patron saint of womanhood. And while I was consumed with the fear of emasculating the father of my children, he was too busy changing, feeding, burping, cuddling, and raising said children to even notice. 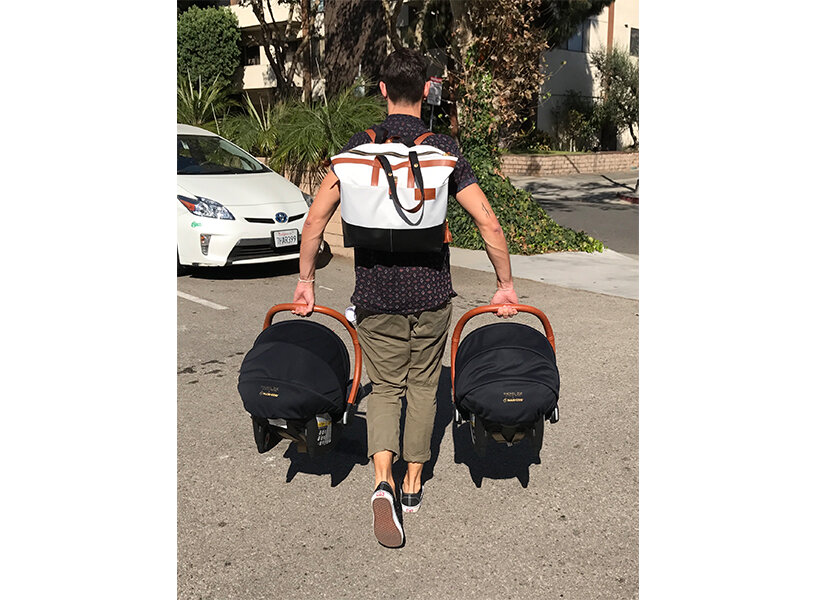 He ignored the raised eyebrows, brushed off the ‘Mr. Mom’ jokes, and wasn’t remotely embarrassed to be the only dad at our local Mommy and Me class.

He routinely brought the babies to my studio and hung out backstage during tapings, unashamed to talk sports with the crew as he rocked a double stroller and a diaper bag.

About three months in, I looked over at him from on-set. He smiled at me with a baby in each tattooed arm and spit-up running down his white t-shirt. At that moment I realized he didn’t feel emasculated, he felt proud. Proud to be caring for two babies every day, proud to be married to their working mom, and proud to be supporting our family in the most vital way possible.

Now I am not sharing this so that we all slow-clap my husband for staying at home for a few months. Nor am I suggesting we reinforce the stigma around stay-at-home dads by celebrating every guy who burps a baby or changes a diaper. I am sharing this to help break that stigma. To stand up and shout out: “My husband was a stay-at-home dad and he still has a career and a sense of identity and self-worth and masculinity and a deep love of beer and sports!” 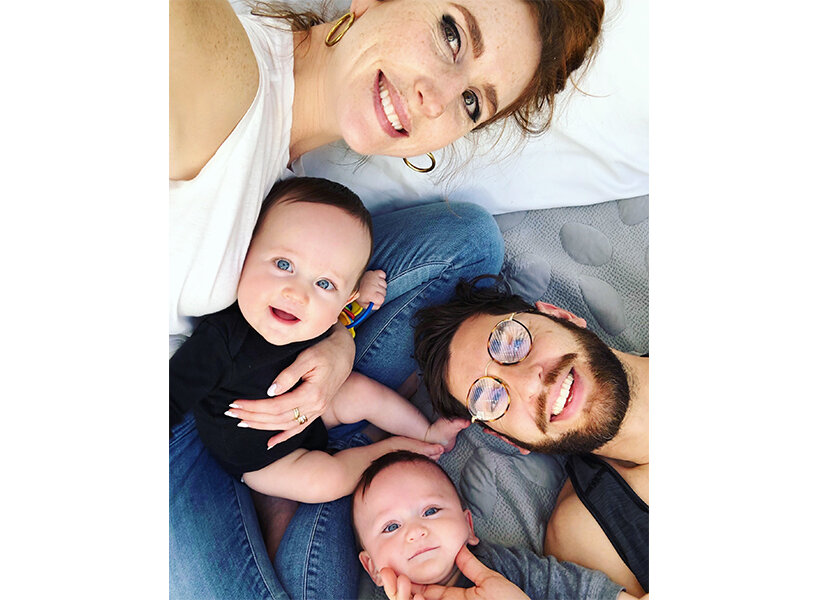 I am also sharing it because I never have. Because I have led people to believe that I am a strong, independent woman who does it all on her own, when in fact, I am a strong independent woman who only does it with the help of a strong partner and an amazing father. A father who stepped away from his career so that I wouldn’t have to. If he is “man enough” to do that, then it’s about time I am woman enough to admit it.

So thank you, Evan, for allowing me to pretend you didn’t exist for a decade, for supporting me in the job that I love, and above all, for helping raise our boys to become men just like you.